VICE is known for its bold explorations of "uncomfortable truths" and "going to places they don't belong," partly due to the controversial videos on its YouTube channel. But it didn't always have the millions of subscribers and views it has today - three key events led the channel to its current success. VICE grew its channel views, subscriber base and watch-time with a few optimizations and smart strategies that leveraged breakout videos for overall channel growth.

Kick-start viewership with off-site sharing and posting of videos

Optimize programming strategies and content, such as playlist viewing and thumbnail selection

VICE originally started its YouTube channel with the intention of catering to (what it assumed were) the interests of a YouTube audience. But, it didn't find success building a sustained audience until it returned to what VICE does best — long-form, gritty documentaries. From the beginning, VICE optimized every video upload and took a strategic approach to program its channel. This investment, along with excellent watch-time performance, helped magnify the impact of individual successes by converting viewers into subscribers and spurring residual viewership from top-performing videos.

Several important events contribute to the lifetime growth of the VICE channel, but here are three key optimizations and strategies that ignited sustained success for the channel.

After weeks of uploading dozens of videos, VICE had its first breakout with two videos in May 2012: Suicide Forest in Japan and The World’s Scariest Drug. These videos were some of the longest uploaded to the channel (longer than 20 minutes), and were able to keep viewers watching for an impressive average of over 12 minutes.

VICE's strategy starts with creating extremely compelling content. But it also maximizes the opportunity for success by embracing off-site sharing on many social media sites. In the case of these two breakout videos, both were shared on reddit.com within the first two days of upload, which helped drive 80K and 60K views, respectively.

This initial event created a snowball effect — other sites embedded the content, prompting viewers to share across social media channels. The external traffic to these videos also led to new viewership across legacy content by way of suggested video referrals. VICE's content continues to be embedded on top blogs and sites, which prove to be a reliable traffic source.

The success of these two videos dramatically improved VICE's viewership — from 150K views per week to a sustained 1M per week — and subscriber base, adding 45K subscribers in May. Shortly thereafter, VICE surpassed the 100K subscriber milestone.

Long-form success: An average video watch-time of 7+ minutes signals VICE’s successful optimization strategies and the engagement of their audience with long-form — it takes full advantage of lean-back experiences and drives watch-time for the channel. Playlists and ‘watch-later’ viewership has 50% more watch-time per view than other sources.

To date, the VICE channel’s biggest success is a video from September 2012 titled First Animal to Survive in Space, optimized with a clear and captivating thumbnail.

Many factors go into YouTube algorithms for promotion, but complementing great content with attractive metadata is essential to help videos reach the greatest exposure possible on the platform.

In this case, the video eventually made its way to the YouTube logged out homepage where it gained millions of views in a week from the placement. But, like many new uploads, it did have a modest start. In the first four days, the number one traffic source was from the channel’s own subscribers. Here, the channel benefited from having built up 225K subscribers to get new uploads into browse pages. This video’s particularly eye-catching thumbnail and embed traffic ultimately helped take the video from a subscriber success to being featured on YouTube’s homepage for all visitors to enjoy.

This homepage success was a significant step for the channel’s growth in viewership. It gained over 100K subscribers during the month of this homepage placement, and viewership grew to 3M views per week, reinforcing the importance of putting a video’s best foot forward with the perfect thumbnail. 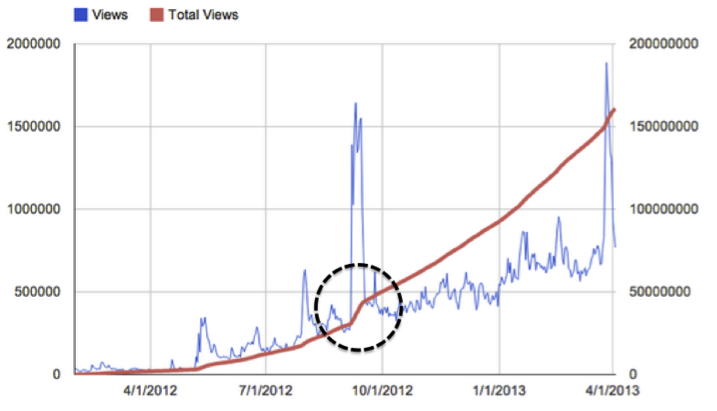 Targeted topicality for a viewership boost

In March 2013, VICE released 3D Printed Guns as America’s gun control debate heated up, related search terms were trending, and people were looking for content on the topic. After months of interest in the search term “gun control,” this YouTube search query spiked again, ranking 39 on the Google Trends index during the week of March 24, 2013,1 when VICE released the video. Most of the video’s initial viewership came from off-site sources, with 35% of views coming from embeds in the first three days.2 This topical video touched on a hotly debated topic, which helped it receive 73% more shares per 1K views than other VICE videos.3

3D Printed Guns was a unique contribution to the cultural conversation when it was released and continued to be relevant in the months following. 30 days after its release, search traffic ranked as a Top 3 driver of viewership, comprising 20% or more of views.4

A smart strategy for a smart channel

The foundation of VICE’s success is engaging content and sticking to what it does best — documentaries. With strong watch-time performance that enabled future breakout hits, they proved that long-form content can succeed on YouTube.

With a solid start and a focus on content optimizations such as off-site sharing, thumbnail selection, and content topicality, VICE was able to take advantage of individual video successes and view-through rates to build a long-term audience for the channel.