March means one thing for college hoops fans: March Madness. But the NCAA tournament, which kicks off next week, isn't just for diehards. It's a mainstream event and one of the year's biggest marketing moments. The web makes it easier than ever to get into the action—whether you're a pro bracketologist or casual fan. Here, we look at last year's numbers and the early trends for 2014 to help predict the field for marketers.

Fans never have to miss a game—even when they're at work. Last year, we saw a 26% growth over the previous year in various searches for where to watch the game online. On the first Thursday and Friday of the tournament, a disproportionate number of those searches, 82%, came from desktops (Google Internal Data, 2013). Surely, the "boss button" came in handy. This might mean lost productivity, but for the enterprising advertiser, it's two more days each week to score points with customers on digital.

Mobile has changed the game

When they're away from their desks, fans turn to their mobile devices so they don't miss any of the action. Most often, they search for terms such as "scores," "results," "highlights" and "news." Visuals are especially compelling for fans, so we also see a lot for searches for "videos," "images," "pictures," "photos" and "reactions." In 2013, searches for these terms grew 120% on mobile, compared with the previous year (see chart below). We especially notice an increase on weekends when fans are watching from the couch or while they're out at bars. Brands and publishers will want to keep this in mind as they generate NCAA-related content and ensure it's accessible across all devices to reach these constantly connected fans. 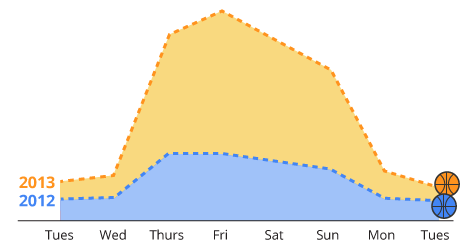 It's Merch Madness during the finals

If a team makes it to the Elite Eight, we see a spike in the demand for its branded merchandise, such as jerseys and t-shirts.

Apparel Searches for Teams in the 2013 Final Four 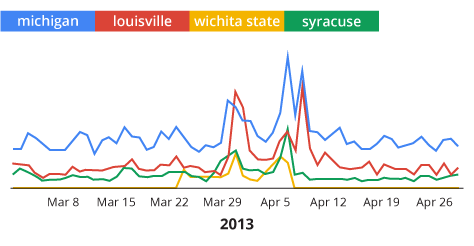 This demand is strong year-round for perennial sports powerhouses such as Louisville and Michigan, but more ephemeral for those Cinderella stories. As you can see in the graph above, apparel demand rose for last year's breakout star, Wichita State, as it made its way to the Final Four. Demand fell once the team was eliminated, but it's on the rise again thanks to the team's record undefeated regular season heading into this year's tournament. This goes to show the power of March Madness as a brand builder—one that retailers and universities alike can take advantage of.

Brands cashing in on brackets

For some, the fun of March Madness isn't about watching the games, it's about predicting the winners. Searches for brackets leading up to Selection Sunday have grown fourfold since 2008 (see chart below).

Brands are fueling this trend by sponsoring contests. A great example is Quicken Loans' Billion Dollar Bracket Challenge, which the company is doing in partnership with Warren Buffett's Berkshire Hathaway. We've seen huge growth in searches for this branded bracket; "Warren Buffett ncaa" and "quicken loans ncaa" are both top NCAA-related searches (see below). 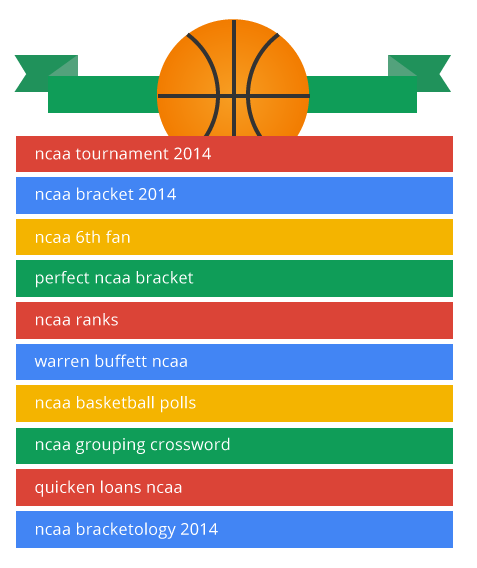 Look for bracket searches to spike on March 16, Selection Sunday, and the day after as people research teams and place their wagers before the tournament begins.

Marketers can bet that these trends—streaming, mobile, merchandise and brackets—will continue to grow this year. UPDATED: To stay on top of what's trending during the tournament, keep tabs on google.com/trends/ncaamarchmadness for the latest.