Not on the list for an exclusive event? No problem! All you need to join in is a connected device. In this research paper, we dive into Google and YouTube data to examine how gaming fans are using digital tools more than ever to virtually attend the biggest gaming event of the year.

Last June, as game companies showcased their newest trailers at the Electronic Entertainment Expo (E3) in Los Angeles, some very important people were missing from the audience—the fans. Because E3 is an industry-only event, the very people these publishers hope to eventually reach and engage—the gamers themselves— are not among the attendees. Luckily, these days physical presence is no longer required to "attend" an event. Live streaming and real-time information updates have made virtual attendance a viable option for all kinds of exclusive events, from Coachella to meetings in the White House. Indeed, as E3 press conferences kicked off, a multitude of gamers were glued to their screens so they wouldn't miss a second of the action.

To understand how gamers use the web to find and consume the latest E3 information, we analyzed Google and YouTube's anonymized search and viewing data from 2012 and 2013.1 In this research, we define gamers as the aggregate of those individuals who searched for gaming content on Google and viewed gaming videos on YouTube during E3 week.2 To virtually attend E3 and learn about the latest gaming announcements, gamers increasingly rely on search and online video. During the week of E3 last year, activity on Google and YouTube significantly increased year-over-year (YoY).

During E3 week, gamers actively search for information about the gaming press conferences that typically happen the day before E3 begins, as evidenced by the below chart. Since gamers can't attend E3, live streams of press conferences are hugely important to them. In fact, seven in ten E3-related searches on Google were for "livestreams" during last year's E3.3

Viewing of non-live gaming-related videos peaks on the second day of E3, which is typically when publishers publicly release the new videos and trailers of their upcoming titles that gamers are eager to consume. 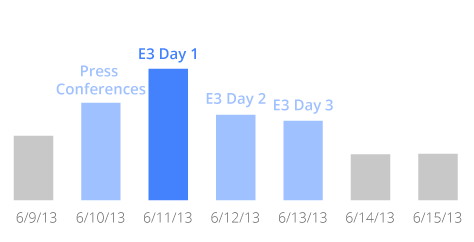 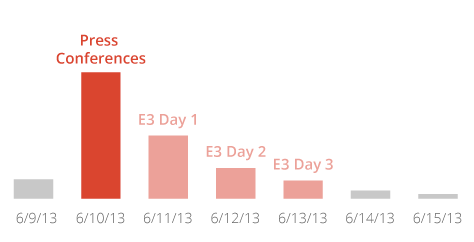 As one of the most tech savvy and connected audiences, gamers increasingly rely on multiple devices to consume E3 content. Smartphones and tablets provide gamers with access to information anywhere and anytime. From 2012 to 2013, there was a 143% increase in the number of E3-related searches on Google and an 80% increase in game video views on YouTube during the week of E3 across both smartphones and tablets.

Game Video Views on YouTube by Device— Week of E3 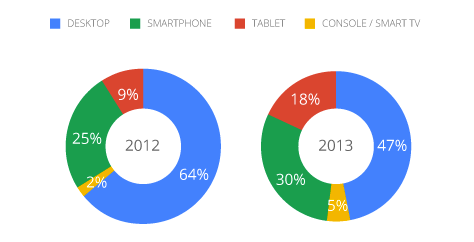 E3-Related Searches on Google by Device— Week of E3

The excitement surrounding announcements at E3 motivates gamers to quickly search for more information, often within just minutes. Console-related searches for Xbox One and PlayStation 4 peaked immediately following each press conference, as illustrated in the charts below. We hypothesize that gamers watched the live streams of the press conferences as they happened and then quickly turned to Google to search for additional information about these consoles after the respective press events ended. For the next- generation console press events, it appears that gamers were interested in comparing the two gaming consoles, as searches related to the Xbox One and PS4 spiked at the same times. 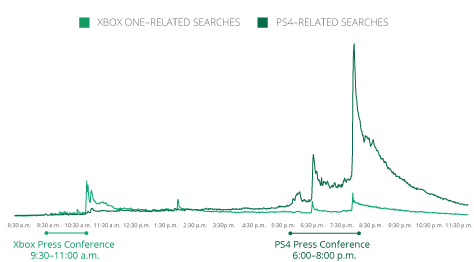 So gamers are searching for more information about announcements at E3, but what exactly are they looking for? For hardware, Google's search data reveals that they were most interested in learning more about the price of both consoles. Gamers also wanted to find information about purchasing / pre-ordering a console as well as news and reviews. Playing used games on the Xbox One was a hotly debated topic among gamers last year, a trend reflected in Google's search data.

When software was announced at last year's E3, gamers were interested in finding more info on where to purchase and pre-order, official information and reviews, video of that game and joining that game's social community. The chart below shows popular cosearches for major video games.4

During E3 week last year, gamers showed the most interest in the console games below. These titles earned the greatest number of searches on YouTube and Google.

Our research reveals that E3 is a major moment in the gaming industry that sparks tremendous online engagement and buzz as gamers virtually "attend" the event.

We found that gamers:

As digital activity surrounding live events continues to grow, it's important for brands to deliver the content and information that virtual attendees seek. By promoting the news and trailers that gamers crave during E3, game companies can guarantee their fans a digital front-row seat to gaming's biggest event of the year.